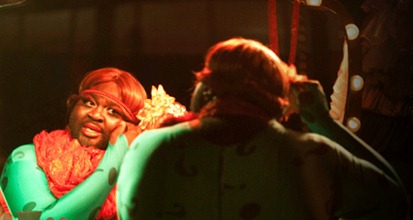 Le Gateau Chocolat is currently performing as part of the Scirt World Buskers Festival at The Press Club – Busker Park, Christchurch until 22 Jan 2013 and I strongly recommend you pay this show a visit.

Walking in to the auditorium you are greeted with a stage filled with glittery dresses on hangers, a fairy light covered clothing rack which also doubles up as a portal between dressing room and onstage stage.

For Le Gateau Chocolat the fabulous Nigerian-born singer with a law degree, "why not?" has always been more fun a question to ask than “why?” The show opens with a goose bump-inducing rendition of "As If We Never Said Goodbye", and will have you in deep thought about where you are in your life or simply have you in tears. 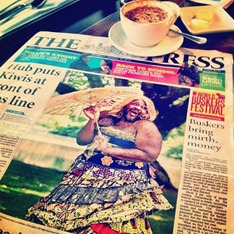 I should say at this point, I’ve never been a big fan of drag (hard to believe I know) and when I saw the front page of The Press the other day I was…. unsettled should we say?! Now having been to the show I have a new understanding for the art.

Back onstage he burst into another song with his ably accompanied by a cellist and a pianist, who are integral to the show, but who manage to remain largely inconspicuous until they become a key part of the show’s gorgeous and celebratory finale.

Le Gateau Chocolat is willing to open up to the audience, but at the same time being extraordinarily witty is what makes this show so enjoyable, that and its careful planning so you end on a magical high.

To sum up in one word: Fabulous!

Quick mention; Thanks to the team at Cantab Rehab for the tickets!